Charged with defending a woman who has confessed to poisoning her famous televangelist husband, Seattle attorney, Reina Dessiner, soon finds herself battling for her own life, through the streets and skies of the Pacific Northwest.

Enlisting the help of a quirky entourage of friends, Reina goes undercover into the multi-million dollar world of televangelism where she must take justice into her own hands in a race to save a modern-day savior. 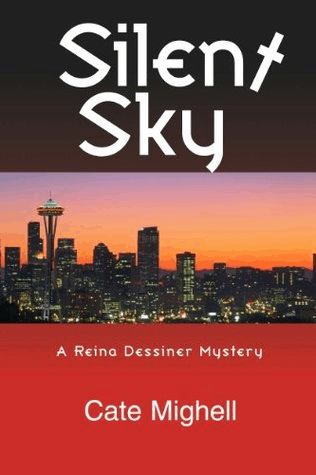 Maria lay stretched on the floor, arms extended perpendicular from her body.

She had lain there so long that her muscles no longer cramped, having either relaxed or gone numb. The first time she prostrated herself, some months ago, her tears had soaked the carpet, each drop disappearing silently into the soft, hand-woven, Persian rug. Now, the tears were gone. Only the daily face down, heart down, body down embrace of the ground remained. A total release into its hardness.

She knew Peter would be home soon. Rising slowly, muscles and joints creaking at the transition from horizontal to vertical gravity loads, she doubled over at a sudden pain in her side, as if she had been stabbed. When she could finally stand straight, she turned to the long mirror in the corner. Staring without recognition, she whispered, "Why do you look for the living among the dead?"

She shook her head violently as if to clear it, straightened her skirt, and reached for a brush. Seeing that her left cheek carried indentations from the carpet - a long line, crossed by a shorter line - she patted and rubbed the marks away. But what did it matter?  Peter would never notice.

Entering the kitchen, she surveyed its tidiness. The table was set, napkins folded and ready for laps, water glasses filled and ready for lips. But it was for appearances only. She knew he wouldn't eat. She furrowed her eyebrows in surprise at the homey curtains and the little knickknacks on the windowsill. Although chosen by her, they seemed foreign, placed there by a stranger. Gazing at the large crucifix on the wall above the knife block, she noticed a splash of red on it. She took a sponge from the sink and wiped it off. Tomato sauce from last night's pasta.

Disoriented, she glanced at the all calendar for the date, then turned away without remembering it, one day the same as another. Going to the oven, she pulled out the rice casserole and placed it on the black and blue trivet, one of the few items from her mother's kitchen. She stared at the steaming dish, knowing it would cool and congeal and then she would dump it untouched into the garbage.

Maria heard the click of the front door in the silent house. She stared sightlessly out the window into the gray of the day as her ears followed his footsteps down the hardwood-floor hallway and into the bedroom. She heard the thump of his body as it fell like a dead weight onto the mattress, and the oof of a weary exhalation.

She turned to the refrigerator, then turned slowly and silently down the hallway to the bedroom. She sat down gently next to her husband, her weight barely indenting the edge of the bed, and smoothed the hair from his brow. Damp, sticky, hot.  Bending to kiss his forehead, she tasted salt on her lips.  She knew he was dying, regardless of what the doctor said.

"I know. I brought you some orange juice.  Here drink." She held the cup to his lips.

His head fell back on the pillow.  "You're too good to me," he murmured, eyes closed.

"Yes" she whispered back. "Yes Peter".

"Silent Sky is not only a real "page turner" that's hard to put down but also weaves an intriguing tale that blends flying experiences and local Seattle-area landmarks that make it particularly comfortable reading for Northwesterners. Cate uses her years of aviation experiences to add a nice "flying" element that enriches the story for aviation enthusiasts without detracting from the story or overwhelming readers with too much flying technology. A really enjoying book from this first-time author, who promises more in this series of aviation mysteries. Bought this for my Kindle and I'm eager to see the next volume..."

"A great read! A mystery with an interesting twist... a bit of humor... a bit of mystique that makes your mind dive deeper into the story. I found myself "INSIDE" the story with the many familiar references and the hints of the author' personality in her writings. And yes, once you start, make time on your calendar.... because you will not want to stop until you have finished this read. And then... sadness overcomes oneself... the story has ended. You flip the pages back a few, you quickly read them again to assure you have missed nothing... you look to the end and again, there are no more pages, this great read is over... for now."

This book had me hooked by the end of the first page. Cate's description of her main character, Reina Dessiner, was so vivid I felt I she was already a friend of mine. And her other characters are interesting and intriguing as well. Even the bad guys! The plot develops at a good pace and takes unexpected twists and turns that keep the reader guessing. Cate Mighell has a wonderful gift with words. The scenes she describes seem so real that I feel like I've been there myself. Couldn't put the book down, and can't wait for the next one!

Silent Sky is an excellently well written page turning mystery with a bit of humor and a truly likable main character. I felt like I knew Reina , Liz and Getta personally and could easily picture the parts of town and people with the descriptions of both. I was not able to predict the ending as unfortunately with many of the mystery novels I read I can figure out the ending well before I reach it but I was pleasantly surprised to be kept guessing till the end!

I loved the book. It's one of those books that you pick up and don't put down till you've finished the book! Well written mystery and fun to have it set in the Seattle area as I was familiar with the landmarks, airports, and venues. I was sad to come to the end of the book as I was enjoying the adventure and didn't want it to end.